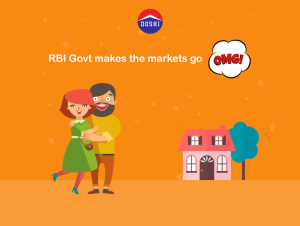 As all his base moves of the past were within 25 basis points, market players were expecting more of the same, and were surprised by the unusual rate cut in the fourth bi-monthly review of monetary policy this year. Since it first started lowering the rates in January, the repo rate has been cut by 125 bps by the central bank this year.

However, banks received a veiled warning as they had reduced the median base lending rate by just 30 basis points - under half of the 75 bps policy, despite easy liquidity. This led SBI to reduce its key lending rate by 9.3%, to 40 bps, the largest rate cut by any bank so far. The Bank of India and Andhra Bank both reduced their base rates by 25 bps. Their deposit rates were also reduced by the same amount.

The RBI's move to cut key interest rates is likely to reduce borrowing cost for both home buyers as well as developers, thus, leading to an increase in housing demand. This repo rate cut will help boost the sentiments of prospective home buyers prior to the festival season. Historically, the RE sector has witnessed huge footfall and conversion of potential home buyers during the festival period beginning from Navratris and till end of Diwali. Thus, the RE sector is likely to see increased trasaction volumes with improved sentiments going forward.

More in this section